About : Commonwealth of Dominica

The name Dominica comes from the Latin word for Sunday, which was the day on which it was spotted by Christopher Columbus.

Dominica is an island nation and border-less country in the Caribbean Sea, the northernmost of the Windward Islands (though it is sometimes considered the southernmost of the Leeward Islands). The size of the country is about 289.5 square miles (750 km 2). The capital is Roseau. You can get your Dominica Passport within 4 months. Obtain your Dominica Citizenship through North Immigration and make your business and immigration dreams come true. The capital is Roseau.

Dominica is largely covered by rainforest and is home to the world's second-largest hot spring, Boiling Lake. Dominica has many waterfalls, springs, and rivers. The Calibishie area in the country's northeast has sandy beaches. The volcanic nature of the island has attracted scuba divers. The island has several protected areas, including Cabarets National Park, as well as 365 rivers. The climate is subtropical and hot, but cooled by sea breezes, with a rainy season in June-October. Rainfall is heavy, especially in mountain areas. 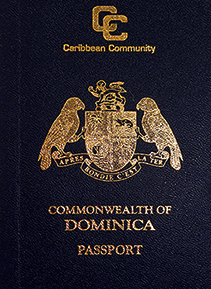